Knowledge is power and at Adroit Oil and Gas, we believe that an informed viewer is a more prepared viewer, which is why we created the Newsroom. Here you will find articles and news from around the world in one location for your convenience. The site is updated daily so check back often.

A SIMPLE NEW FRACKING TECHNIQUE THAT COULD REVOLUTIONIZE THE OIL SECTOR

I want to tell you about a new development in fracking that’s getting some press down in the US. This is actually pretty simple, but if I’m correct in interpreting this, it would be quite important in the global oil patch.

From what I can tell, EOG Resources is increasing IP rates in the Bakken simply by changing the way they frack—from long skinny fracks into formations, into wide short ones that stay much closer to the well bore. And–this is the important part—they say first-year decline rates are going down a lot, and total oil recovered is going up a lot.

In doing the shorter, wider fracks, they use a lot more sand and water to create more rock face/surface to liberate more oil from the stock.

One of the other companies to evidently first use this method is Whiting (WLL-NYSE), and this slide comes from their powerpoint that visually shows what I’m trying to say: 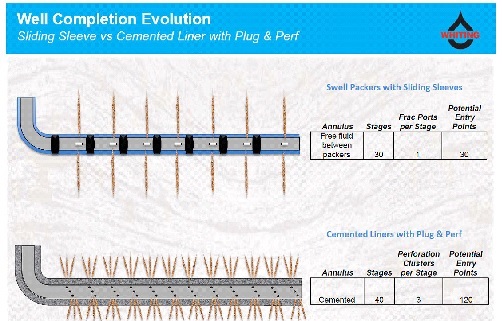 “In the next five years, everybody is going to be doing this,” says author Michael Filloon, who wrote about this very simple new fracking strategy recently at www.SeekingAlpha.com.  It was the first story I’ve seen anywhere on this issue.  “I think it will work in every play in the US,” he adds.

Filloon got onto the story after noticing EOG was handily beating quarterly expectations (they sure have a great stock chart!) and yet there was no conclusive talk from management on the quarterly conference calls to explain why.

So Filloon went online into the North Dakota public data on EOG’s wells and plotted the data himself, working backward to figure out IP rates and decline rates.  It was great investigative reporting. (You should all follow Michael at SeekingAlpha!)

His story—link below—is a little technical, but the charts he uses shows the depletion rates for wells getting lower—meaning the high initial production doesn’t fall off a cliff like the industry has become used to.

There aren’t a lot of data points yet, and they are almost all from EOG, (though supported by the Whiting presentation above which came out at a JP Morgan conference recently) but they point to larger IP rates and lower declines using a wider, shallower frack that uses a lot more sand (called proppant, as it props open the frack pores) and water.

EOG is showing some BIG jumps in the EUR of their Bakken wells in their powerpoint.  EUR stands for Estimated Ultimate RecoveryA guess at how much the well would produce over time—how much oil they actually expect to get out of their wells.”Some of these wells have EURs of two million barrels of oil equivalent–that’s unheard of,” says Filloon.

At the same time, EOG is showing that well costs are coming down.

If it’s all true…what does this mean?  Well, the data is suggesting this could greatly reduce the initial hyperbolic decline in tight oil in North America.

In other words, these wells would produce stronger for longer out of the gate, and recover a lot more oil than before.

That speaks directly to my recent story, which showed cash flows are expanding per boeBarrels of oil equivalent.Takes roughly 6 mcfcompanies usually convert gas production into oil of gas to equal the amount of energy in one barrel of oil. for producers now—so they can weather a drop in the oil price and likely have steady cash flow.

It almost sounds too good to be true, except the Bakken stocks and frack sand stocks took off at the same time in mid-August.  Interesting.

That’s good for refiners, but of course gasoline prices will fall too—but likely not as much as it’s allowed to be exported.

I would also think this is good news for drillers and frackers—more wells can be drilled per square mile if they are just short fracks—”downspacing,” the industry calls it.

It has already been great news for the frack sand companies—Filloon pointed to the charts of SLCA, HLCP and EMES as public frack sand stocks that have skyrocketed in the last two months.

The big producers in the US who have efficiencies of scale—and work 24/7 now should benefit from this as well.

Again, this is one story on one idea, but I find it really intriguing.  It might be true! And if it is, the fast-growing North American oil production would gain another gear—or three.

Unaltered and taken from:

The economics of shale oil

The economics of shale oil